in the Anglican Diocese of Liverpool

A Hymn to St Giles

All hail to you St Giles
Pure vessel of God’s grace
You are now our Church’s Patron
A light to the human race.

Rejecting praise and fame
You left your land of birth
To travel far and wide to find
God’s calling here on earth.

Your days spent in the woods
A deer your only friend
Sustained by prayer and faith in God
Until your journey’s end.

You sheltered sick and poor
And cared for halt and lame.
So gracious in your sacrifice
This day we praise your name.

All hail to you St Giles
Pure vessel of God’s grace
You are now our Church’s Patron
A light to the human race.

“I am the light of the world. Whoever follows me will not walk in darkness, but will have the light of life." 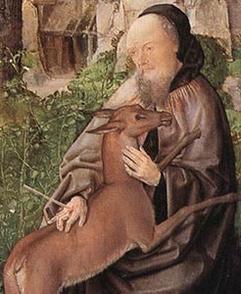 The life of St. Giles, also known as Aegidius, is  a mixture of legend and history woven

together around the deeds of a saint.

He is reputed to have been born in Athens, the son of wealthy parents Theodore and Pelagia,

When he was twenty-four his parents died, and Giles, finding little comfort with wealth in a

time of grief, sold all that he had and gave it to the poor.

a hollow of a rock in a green glade by a stream, shaded by four gigantic oaks.

There he lived in peace and prayer, his only companion a gentle hind (his emblem), whose

While out hunting, Flavius, the king of the VisiGoths, shot an arrow at the hind, missed it,

and hit Giles, who was at his devotions. Though wounded, Giles continued at his prayers and

refused any compensation for the injury done to his body.

Despite this, his commitment to private prayer and poverty remained. He founded a monastery near Nimes which flourished till the Saracen invasion, when it was burned down and subsequently restored.

With the words, ”Lord, now lettest Thou Thy servant depart in peace,” he died on September 1st, 720.

A hymn for St Giles has been written by two members of our congregation as a tribute to our patron.  With words by Sylvia Lawrence and music by our organist emeritus, Ray Battersby, it was debuted at our Patronal Festival in 2014.​